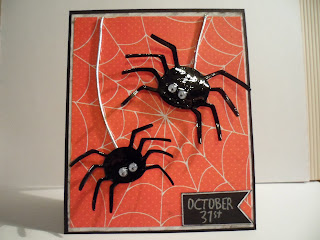 Can you see the shine on the spiders.  I made that happen using a glue called Glossy accents. 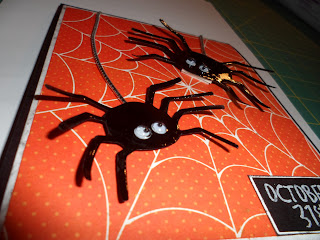 It also looks a little raised and feels silky when you run your fingers across the spider. 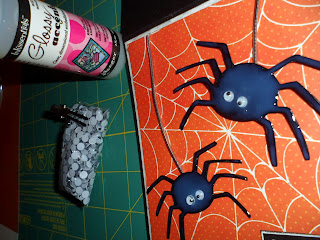 It looks blueish on black paper but it will dry clear.

Apply a generous thick coat but not too much as you don't want it to ooze over you cricut cut.

Its also good to try and remove the air bubbles if you can using a sewing pin.  Most will settle as it dries. 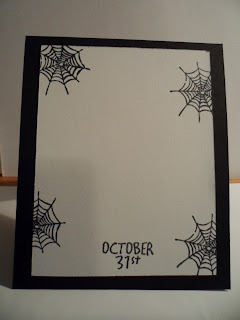 Inside of the card.

Before I applied the white piece I placed it on scratch paper and staggered the spider web stamp around the edge.

Also my October 31st stamp had a border around it that I did not want so i used a cue tip to apply my ink carefully just on the October 31st part. 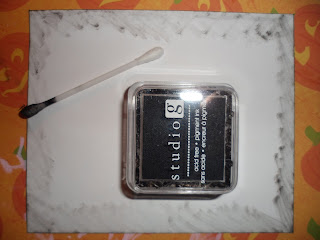 This is the layer between the black and orange spider web paper.  Before I inked it i had everything set up and decided the white was just TOO white. so i used a cute tip and lightly inked around making it a grayish color. 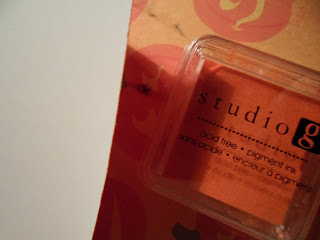 Also when I cut the orange spider web paper you could see the white lining from the paper. I just used a orange ink pad and gently pressed and went straight down to remove the white core.


The papers came from Recollections paper packs.
I used glossy accents to adhere the string. (Christmas string/ribbon)
I mounted the small spider on 1 layer of foam tape and the big spider on 2 layers of foam tape.
Same technique for the October 31st stamp only using white ink on black paper.
I free handed the flag and did two layers also inking the edges with black(tilted the ink pad to see more black on the white.
The spider web paper is actually from a 8x11 1/2 sheet and I just cut it close to the center to get more of the webbed look.
The spiders were cut from the Doodle Charms cricut cartridge page 121. I just don't remember the sizes.


Posted by cricutwhenican at 12:02 PM No comments:

Sugar and Spice Cricut Lite Cartridge
Cut the Stork at 3 1/4 inches
I used Black, Pink, and Orange paper
Pattern paper
Easter pink plaid ribbon
I used a white gel pen to do the doodling on the outside and inside. Line Dot Dot Dot, repeat
Stork is on with pop dots
No sentiment because the pattern paper and colors should lead you to a New Baby Girl
Inside is stamped with Momento Tuxedo Black ink
Small White button with a slightly larger Pink button
Black brad for the storks eye
Stork inked in pink & orange

Posted by cricutwhenican at 2:50 PM No comments: